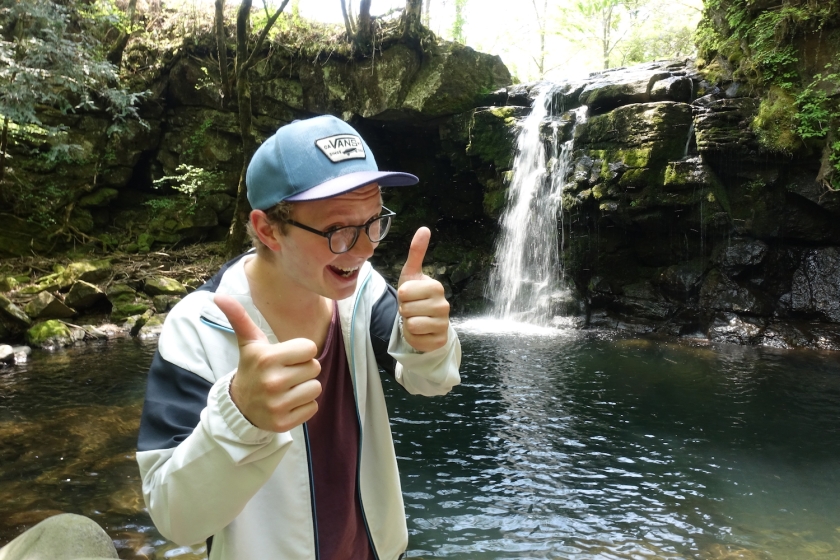 Hello hello!! The sun is out from hiding and the weather is back to its normal sparkling and wonderful self and for some reason, I’m still hanging out at waterfalls.

Since last weeks post was heavily dominated by dark clouds, thick mist, pouring rain, and too many umbrellas, I thought I would share some pictures of how much better Minamioguni and Mt. Aso looks when draped in the sunlight! And while at it I will drop some knowledge bombs about the bred and butter of Mt. Aso, the giant volcanic caldera!

First of all, I would like to point out that I visited Minamioguni for the first time in February last year and then moved here in December. This means that I have more or less only seen Mt. Aso with its yellow highlands,  Japanese pampas grass that shines like gold in the sun and of course, the dark crimson colored cedar trees that make up the heart of the landscape. In short, like the picture above! Minus no cedar trees!

This fact makes it very exciting to be able to follow the process as the solemn sleeping mountain suddenly comes to life and lush green vegetation practically bursts out all around you in wild and unlimited harmony. 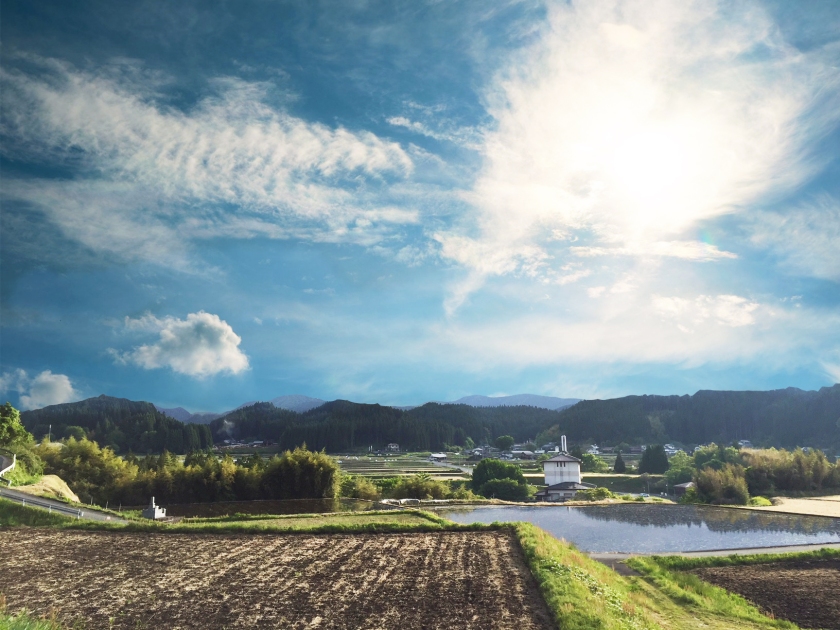 And I can’t get enough of the water-filled rice fields that symbolize the arrival of spring and summer here in Japan. Especially that time when the sun starts to settle in for the day and slides down to a lower position in the sky. These hours right around 4-5 p.m are absolutely stunning and it’s truly a pain when you are out driving because you can’t help but stop and take pictures everywhere.

So what does the Aso caldera (whatever that even is??? Don’t worry, I will get to that!) look like in this beautiful weather? To make sure I don’t shock anyone I’ll start off with a slightly cloudy picture.

As I said, a bit cloudy but I still liked the picture! But anyhow, what is even a ‘caldera’? Is that a Japanese misinterpretation of the word crater? Which at least was my first thought when I heard the word. For people who don’t spend their lives endlessly pondering the deep mysteries of geosciences, you could pretty much put an equality sign between the two. ‘Crater’ is a word that is widely used to indicate some form of larger depression, often caused in relation to an explosion. The caldera, on the other hand, is more specific and indicates a large depression caused by a volcanic eruption that leaves a giant empty chamber underground. The chamber collapses, the ground sinks and voilà, a caldera is born. 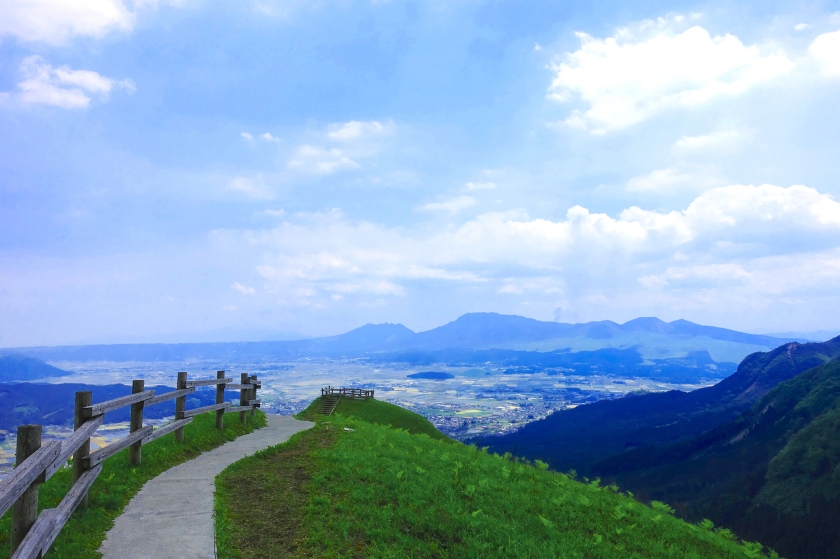 The mountains you see in the distance are called Aso “Gogaku”, or the five peaks of Aso. The five mountains are what remains from the 4 giant eruptions, or pyroclastic flows for the nerds, that occurred between 270.000 and 90.000 years ago and gave shape to this caldera. The five peaks of Aso are actually located right in the middle of the Caldera and the depression continues on the other side from what is visible here. Which is easier to understand if you look at this next picture! 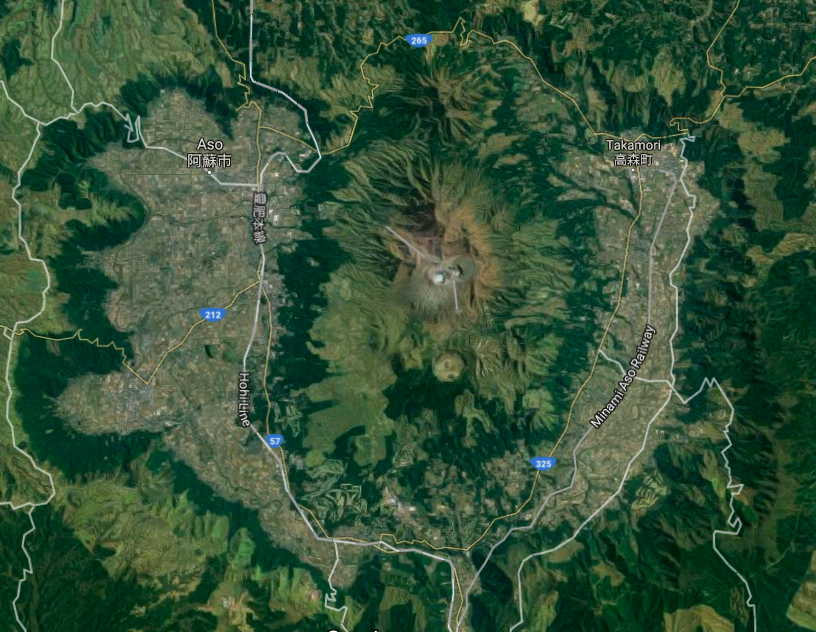 In the middle, we have the still active volcano which for the record is the largest one in Japan and keeps scaring the shit out of me every now and then when it decides to rumble and fart out some volcanic dust. The local people are far from scared though. If anything, they seem happy that Aso is healthy and does some free PR for Kumamoto.
The Aso caldera itself is 25×18 kilometers in size, which even though it is an impressive size, it’s far from the largest caldera in the world. Actually even in Japan, it’s only the second largest. But the Aso caldera has something else that makes it very special and unique in the world! Can you guess what? 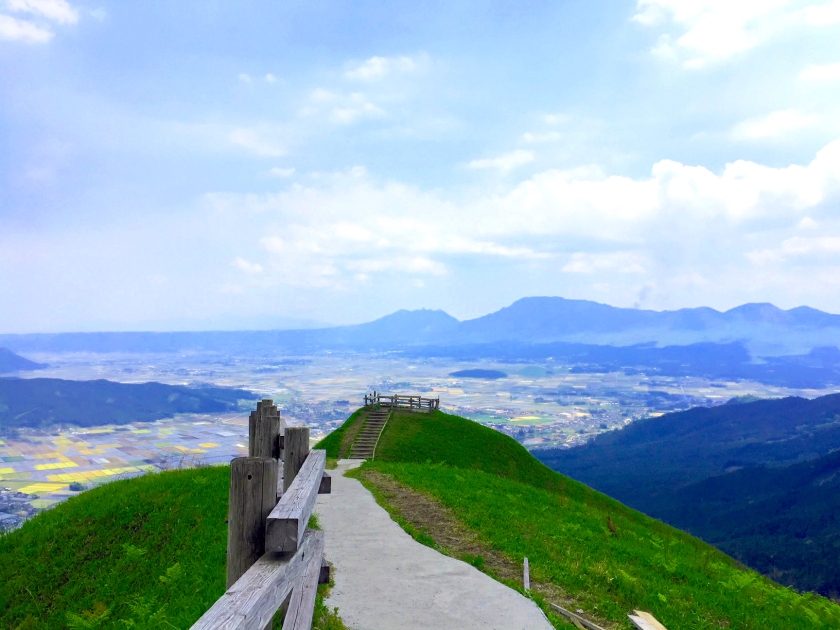 As you can see in this picture, especially to the left, there are crops down in the caldera. And even though it’s far and hard to make out, you can even see Aso city down there. This is what makes the Aso caldera truly special. It is highly unusual with a caldera where the interior is stable and fertile enough to cultivate the lands and build cities. So why is this possible here? That is because the people of Aso have worshipped the volcano as a god of nature since ancient times and through the generations kept putting effort into fertilizing these lands. Thanks to those efforts the Aso caldera is now flourishing with life and has even been recognized as a Globally Important Agricultural Heritage System. The Aso caldera is really overwhelming in its beauty and no picture can sadly ever do it justice. I can only say from the bottom of my heart that I wish that everyone gets to visit and experience it fully at least once!

Well well〜 Let’s move on from the Aso caldera for now! So what is one great way to truly enjoy all this overflowing and spectacular green summer magic? 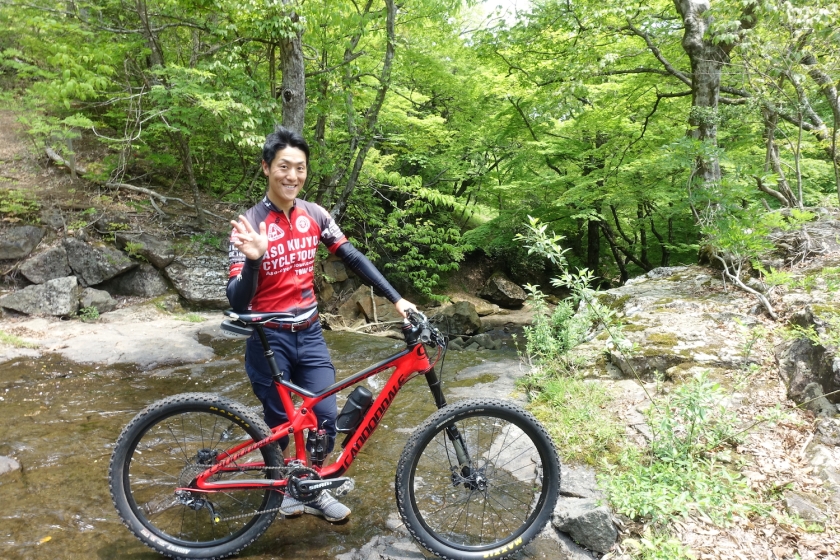 You can go mountain biking with a good friend! 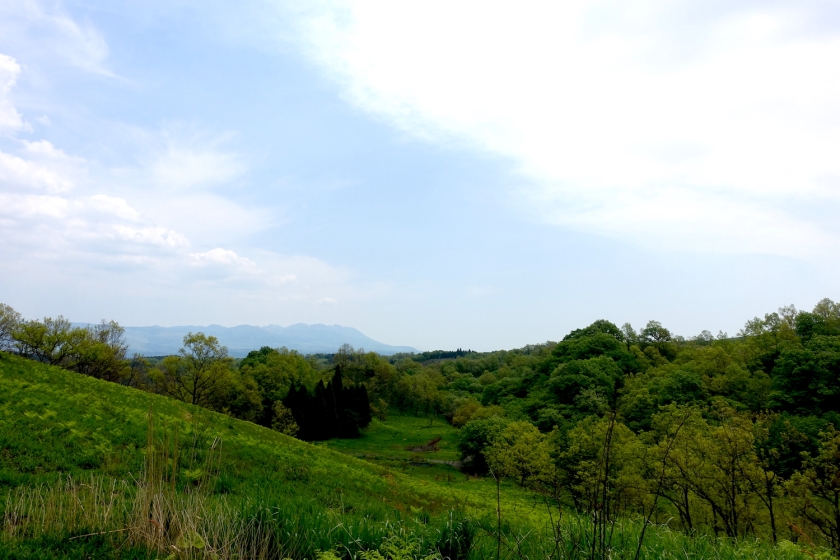 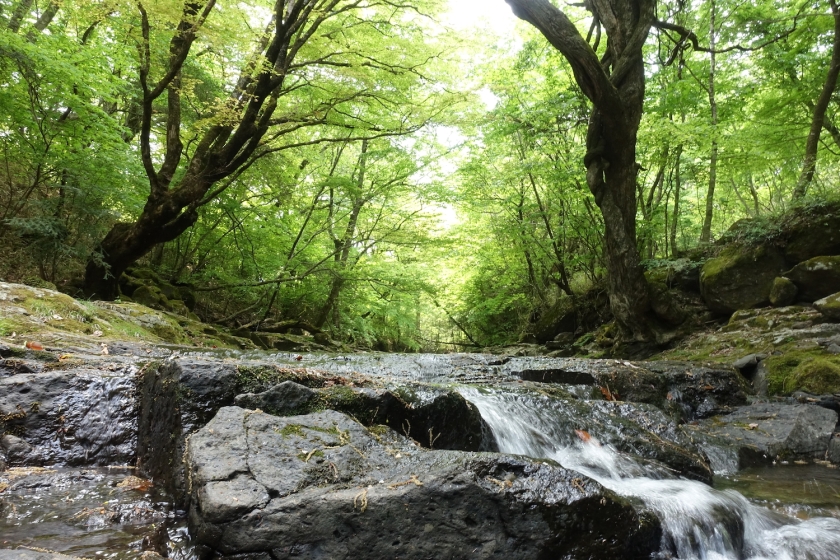 Or maybe even a place like this could be something? 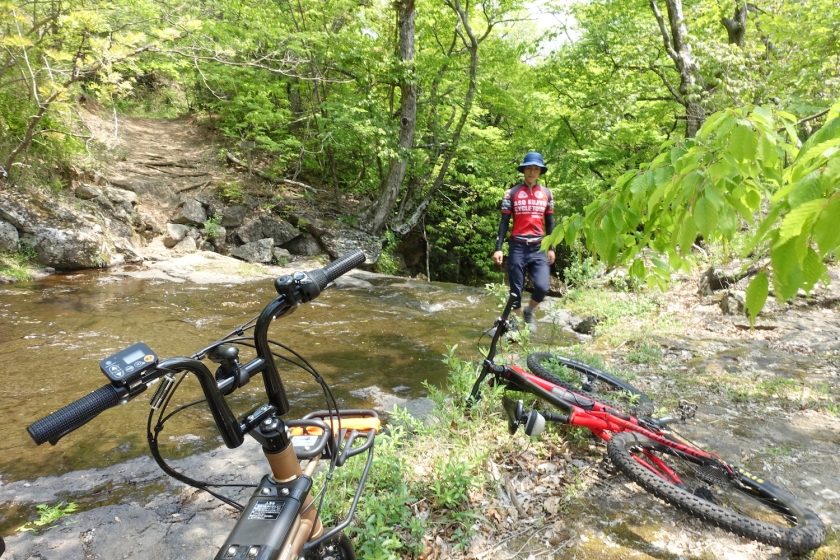 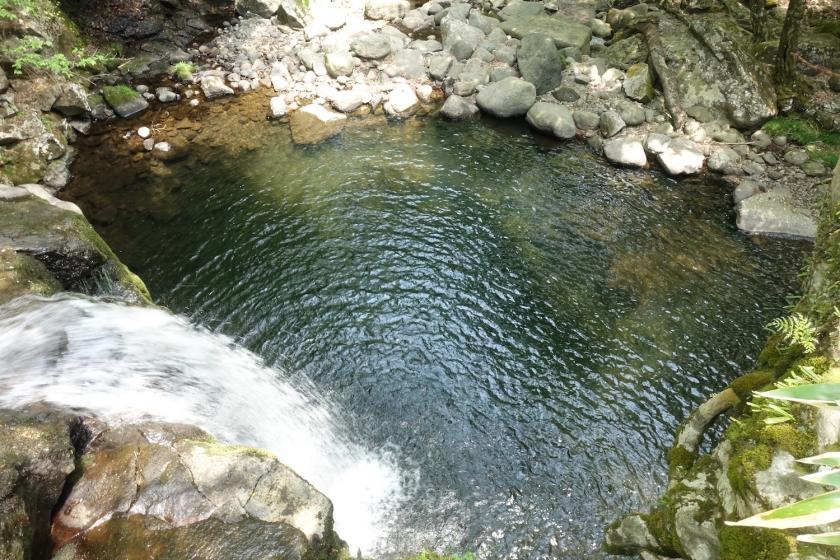 And right when you feel a bit hot and sweaty maybe you find a waterfall like this one here? 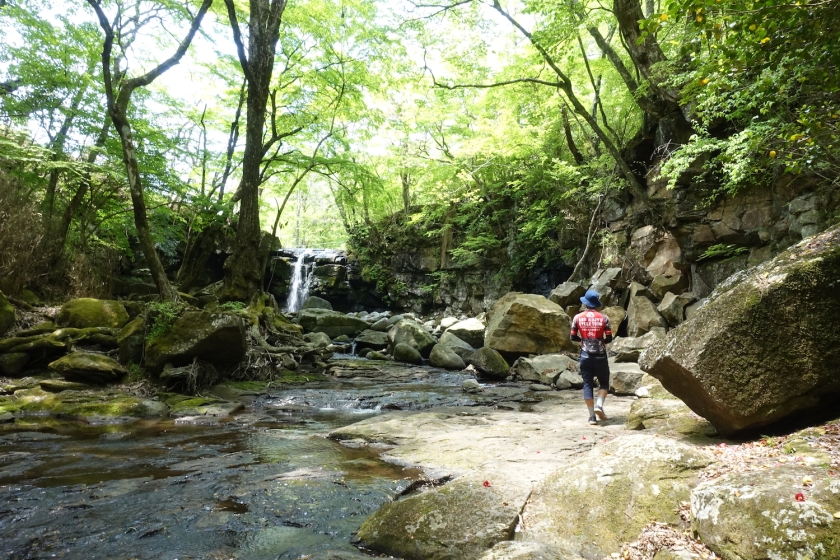 And who knows, maybe you even decide to try and get a bit closer to the waterfall and suddenly find yourself in a scene that could’ve been picked straight out of Jurassic Park. 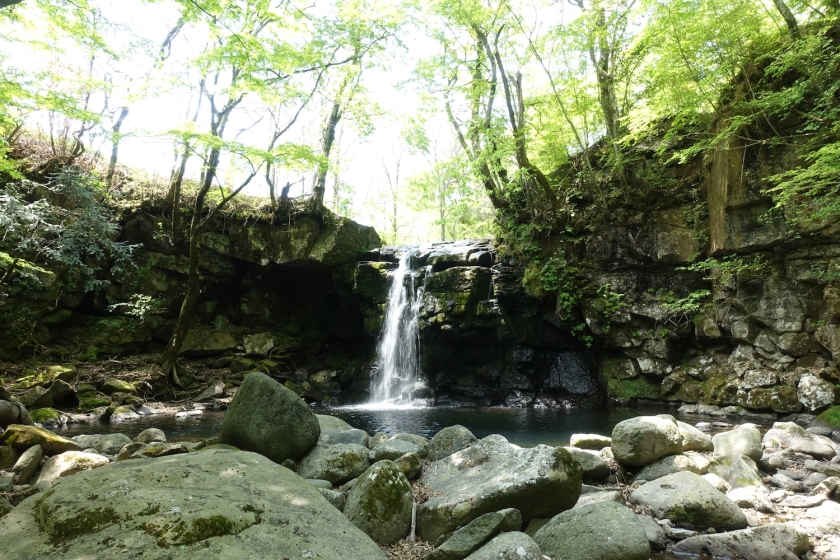 Then maybe, but only maybe, just as you think of having a swim you notice a thousand mosquitoes and decide that it is a bad idea to get nude when you’re still waiting for your second vaccination against Japanese mosquito-born-super-scary-encephalitis a.k.a inflammation of the brain. 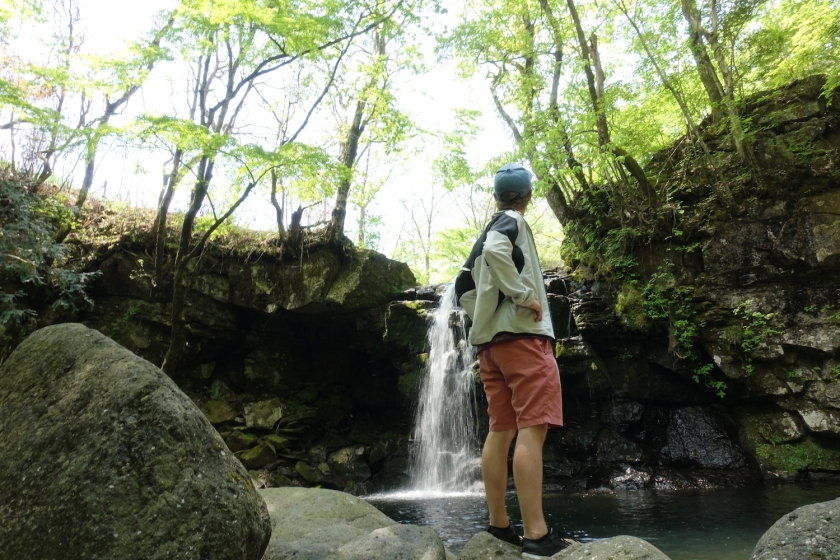 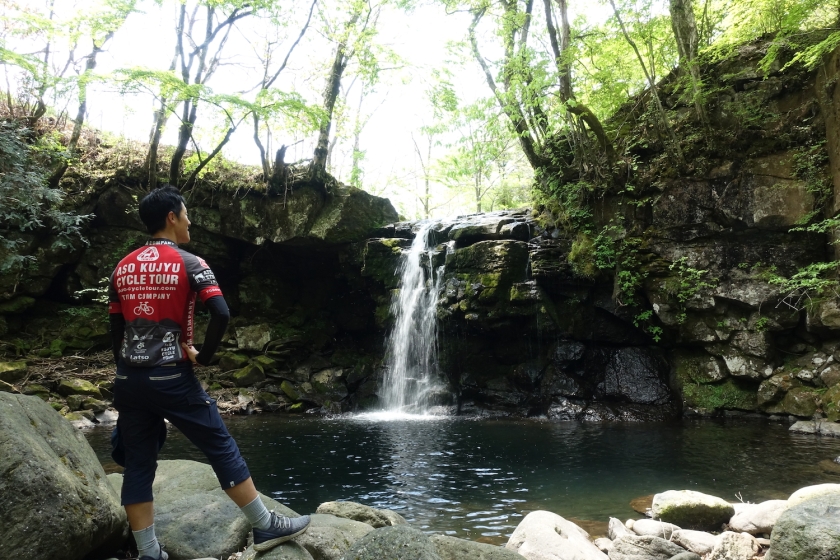 So instead you settle for some posy pictures and then get the hell out of there because you know… You value your life and all that. 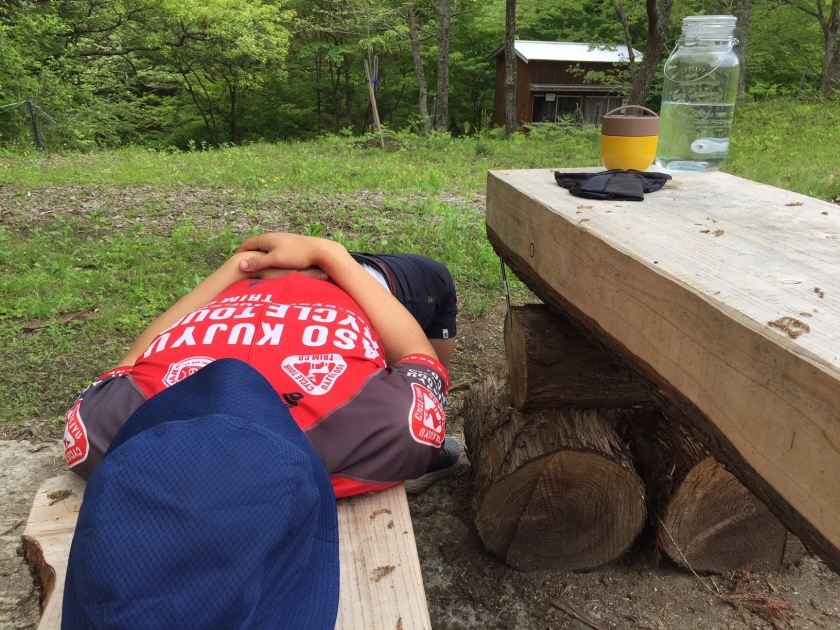 Finally, you might feel so exhausted from your adventures that you have a nice afternoon nap… far away from any flying blood-suckers…

Or at least that is what we did!

So there you go! This is how nice Minamioguni and Mt. Aso actually can look when the sun stops slacking off and does its job properly. I hope you enjoyed it! I have a feeling that outdoor activities and beautiful landscapes will increase here on the blog now as summer arrives so if you are into that stuff, keep your eyes open! And if anyone is passing by Kumamoto, this is a perfect time to visit Aso. I’m waiting for you right here!