Hello friends, family and other readers who might have happened to find their way to my world of slow living, Max here getting all steamed up and cozy!

This time I will share some pictures and words from a rather unexpected visit. A captain of the sea from my neighboring country of Norway happened to be stranded in Minamioguni for a couple of days and since news travels fast in this small town of mine, circumstances led me to have the pleasure of showing him around for a day!

Let me introduce him! This is Magne!

Magne is 69 years old, born in Norway but a traveler and adventurer by heart. As I mentioned Magne is a man of the sea, tall ship navigator, shipping consultant, and master mariner. Now he is retired but Mange has worked as the captain of cargo ships of different sizes and traveled the world through his work.  This time he came to Japan by plane though!

So, how did Mange end up here and how did we meet? Well, our first meeting looked something like this…

Yoga! A friend and neighbor of mine (also mother to the cute little thing face-planting the tatami mats next to me in the middle of the picture!) informed me that her friend Etsuko-san, the peaceful woman to the bottom right of the picture, would have a visitor from Norway this weekend. Etsuko-san has also lived abroad for many years, even in Sweden(!), and loves exploring the world. They actually got to know each other at sea as Etsuko-san has worked many times as the chef on Magne’s ships! Yesterday (Saturday) Etsuko-san had to work which led to me and Magne being set up on this blind date. We also managed to find a third participator during the Yoga-session, Akiyo-san who has studied abroad in L.A for about a year! And yes, you can find her in the picture! The pair of feet and grey pants to the top left!
With introductions out of the way, let’s head out! 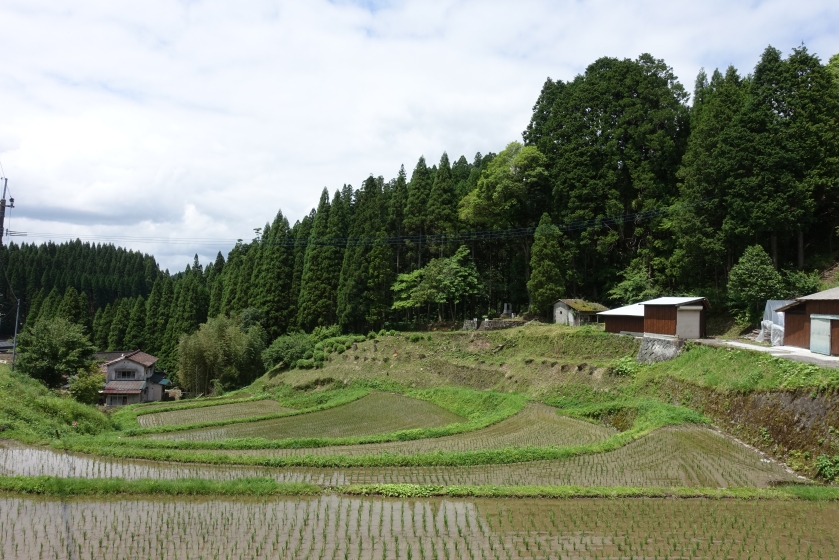 Tateiwa suigen! I know, I keep coming back to this place but trust me, it’s worth it! For those who might have missed it, this is a place in Minamioguni who hosts one of the major spring sources for the longest river in southern Japan. The clear natural spring water that gushes forth from the ground here is shockingly clear and there is nothing I would rather drink on a hot and humid summer day!

The original idea was to enjoy this spectacular water by having the summer specialty of Tateiwa suigen called ‘Nagashi soumen’, which is cold noodles that you eat straight from flowing water. Like this!

But in life, things tend to not always go as planned. Upon our arrival, we found the restaurant-area, which actually is the inside of a greenhouse, to be locked and lights turned off. I gave a call to a man named Shujiro-san, who is one of the locals in charge of the restaurant, and got the shocking and heartbreaking news that because of the bad weather during the morning they had decided to take a break for the day.

But since we had come out here we decided to ignore the sounds of our tummies crying out their disappointment for a while and take a walk around the area and enjoy the countryside scenery. 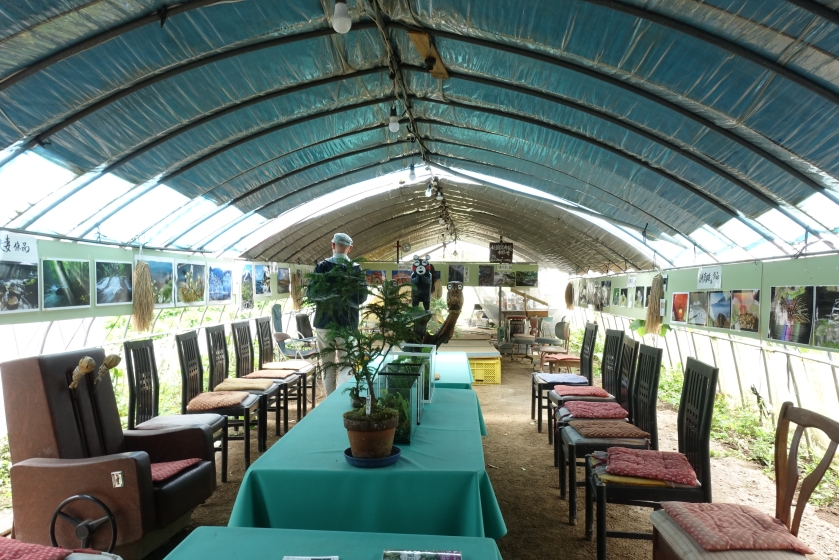 But not before checking out my favorite hidden photo gallery which also is inside a greenhouse. Oh, and if you look to the bottom left you can see that this gallery even features the latest and most high-tech of massage chairs!

You might feel worried about us for having to walk on empty stomachs? Then let me ease your fears! A great thing about the countryside is that food tends to appear when you need it the most. As we walked we soon found an unattended sales spot for vegetables along our path!

This is where local people place the vegetables they have grown and you can pick whatever you want as long as you leave 100 yen (1 dollar) a piece. Mange picked out some tasty looking carrots that would have to serve as our appetizer. 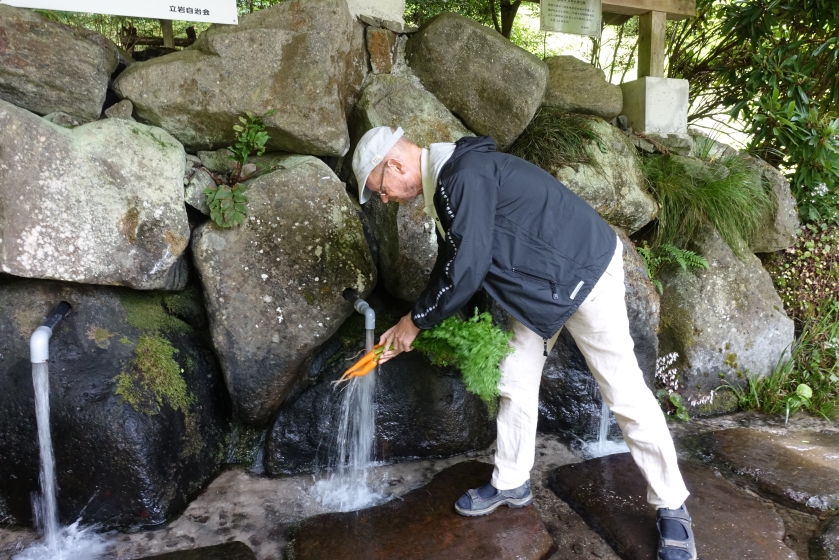 A quick wash in the natural spring water… 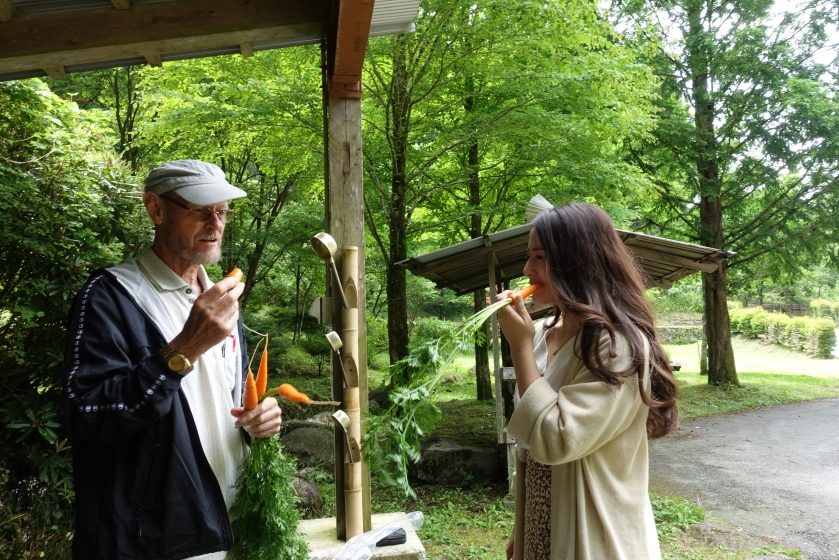 Dinner is served! I mean… Lunch is served! And if you start feeling thirsty? 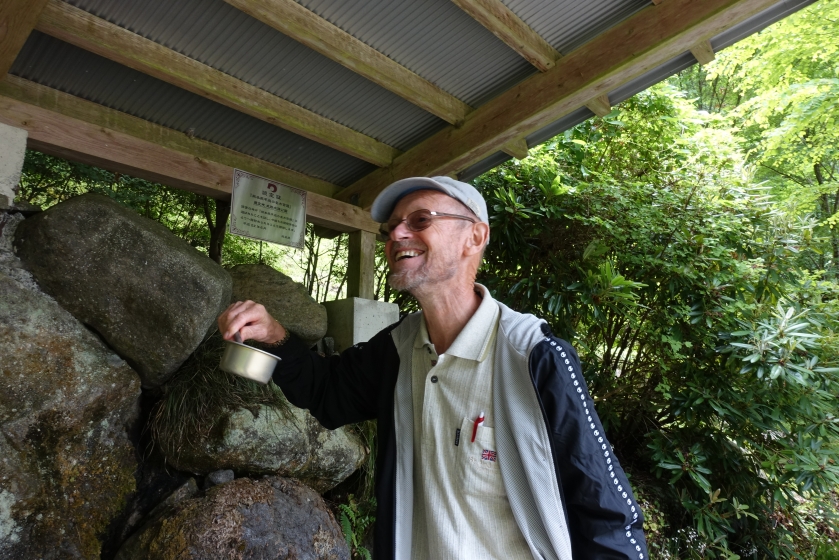 Feel free to gulp away straight from the spring!

Or do both at once?

Invigorated with new power and new smiles through the mystical mountain water and a few splendid carrots our team of three decided to keep pressing on. And little did we know that our main dish and dessert was waiting just around the next corner!

As we followed our path we suddenly happened to run into the earlier mentioned Shujiro-san. Maybe he felt a bit bad for us since they had closed down the business for the day so he invited us to drop by his house for a moment. 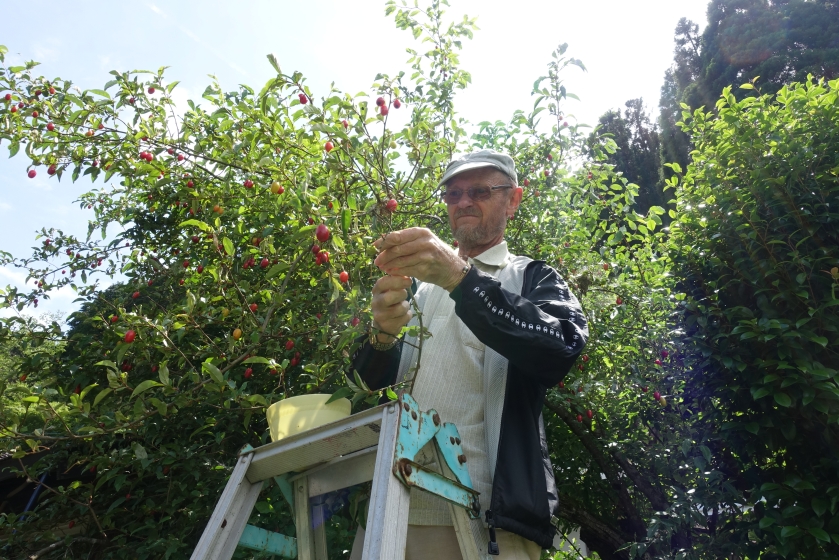 Here Shujiro-san offered us to feast away to our heart’s content at the “Gumi”-berries growing behind his house! I had never heard of this sour-sweet berry before but apparently, it’s translated into “Silverberry”. An unexpected but fun little surprise that further helped to calm the raging storm in our bellies. And look at Magne, like a duck to water!… Get it?? Water! Because he is a ship captain!… Sorry… Moving on!

Our buffet of summer delicacies doesn’t end here though!

Shujiro-san also decided to peal some bamboo shoots and do a 1-minute BBQ using a hand-held burner! For some reason, I was the only one who had to eat it raw but I heard that the roasted one tasted delicious! 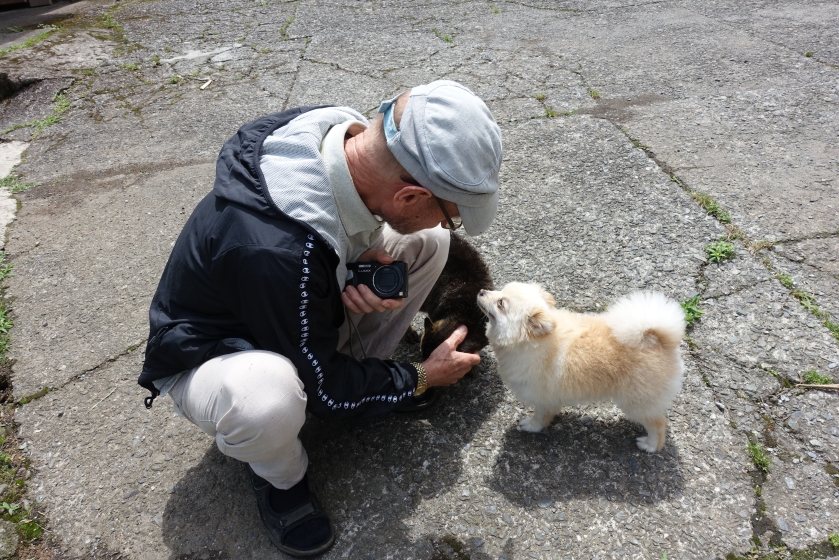 Magne quickly became friends with and got a lot of love and attention from Shujiro-san’s sweet little minions as well!

We might not have gotten quite the experience that we came for, but thanks to the hospitality and kindness of Shujiro-san we got another, more unusual and maybe even better experience! Thank you! When we left Shujiro-san’s place to head towards the beautiful nature of Tateiwa suigen we got recommended a shortcut through Shujiro-san’s rice fields.

Which also turned out to be quite the lovely little stroll!! And if you are wondering what’s catching Akiyo-san and Mange’s attention?… Well, look closer!

Can you see them?? It turns out that the rice fields also serve a second purpose as a mini-safari!

Finally, we arrived by the river stream that passes through and nurtures the lush nature of Tateiwa suigen. Here we got to thoroughly enjoy this moss-covered and blooming natural paradise. 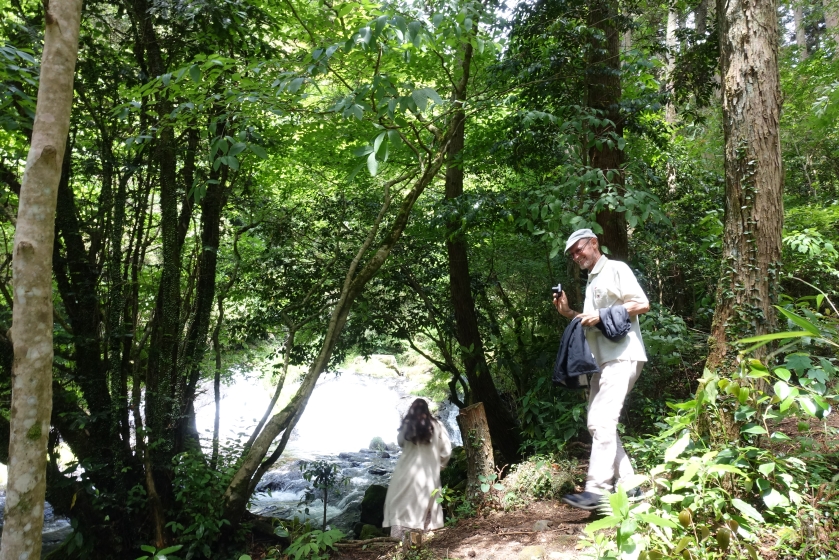 Magne who is a great nature-lover and Akiyo-san who came to Tateiwa suigen for the first time were both very pleased with the tranquil atmosphere and natural beauty that is so typical and plentiful in this little rural oasis. Strongly recommended on hot summer days since the altitude and the fresh spring water keeps the humidity at bay! You get it?… Bay! Since Magne is a… I’ll just stop… Moving on!

After leaving Tateiwa we finally headed for a very late lunch! But we had to take a quick stop and show Magne the hot spring known to be the most embarrassing in Japan!

As you might notice it is sitting in the river next to a frequently used road in the middle of a normal residential area. And NO!! Bathing clothes are not allowed! 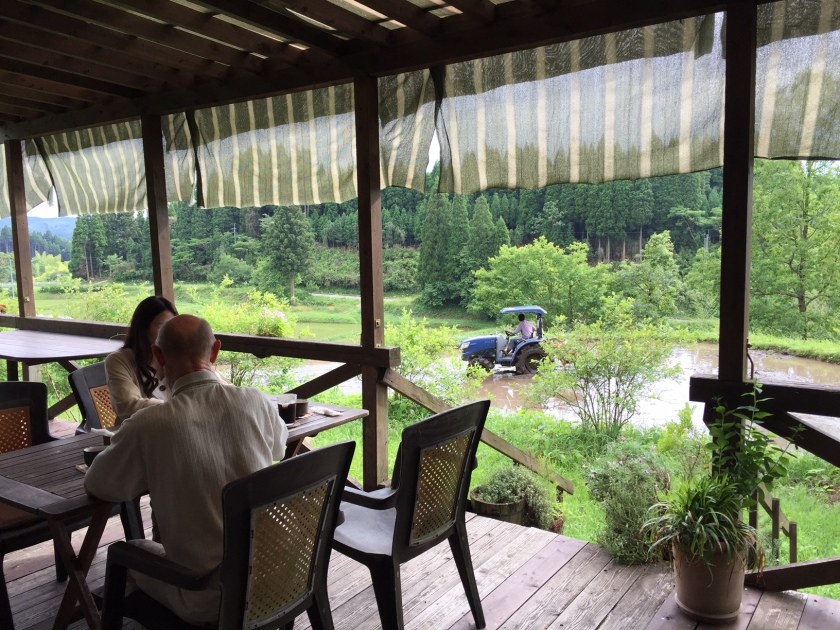 Finally, we got to settle down for a very much needed break! For a vegetarian like Magne, there is no other restaurant that I would rather recommend than Kaze no Mori which I have mentioned here before. And a day like this one, the lovely terrace and the possibility to eat outside just make Kaze no Mori all the more ideal!

Where else can you let yourself be soothed by the idyllic view of the rice fields being plowed while enjoying your lunch? I would have loved to share some pictures of the food but in all honesty, I was so hungry that when the thought of taking pictures crossed my mind, every single bit of delicious seasonal vegetable was already digesting firmly in the depths of my tummy.

After a nice lunch, we went to burn some calories!

The calm and healing forests of Tateiwa is one aspect of the nature that Minamioguni has to offer. Another is the vast and breathtaking grass-plain of Se no Moto Kougen! No better place to go for an afternoon ride!

Apart from the stunning landscapes, would you like to know what the best thing is? The bicycles are electric! Which makes it possible for even the most out-of-shape beer-lover and fried food-maniac (like me!) to ride with the pros and enjoy both uphill and downhill! 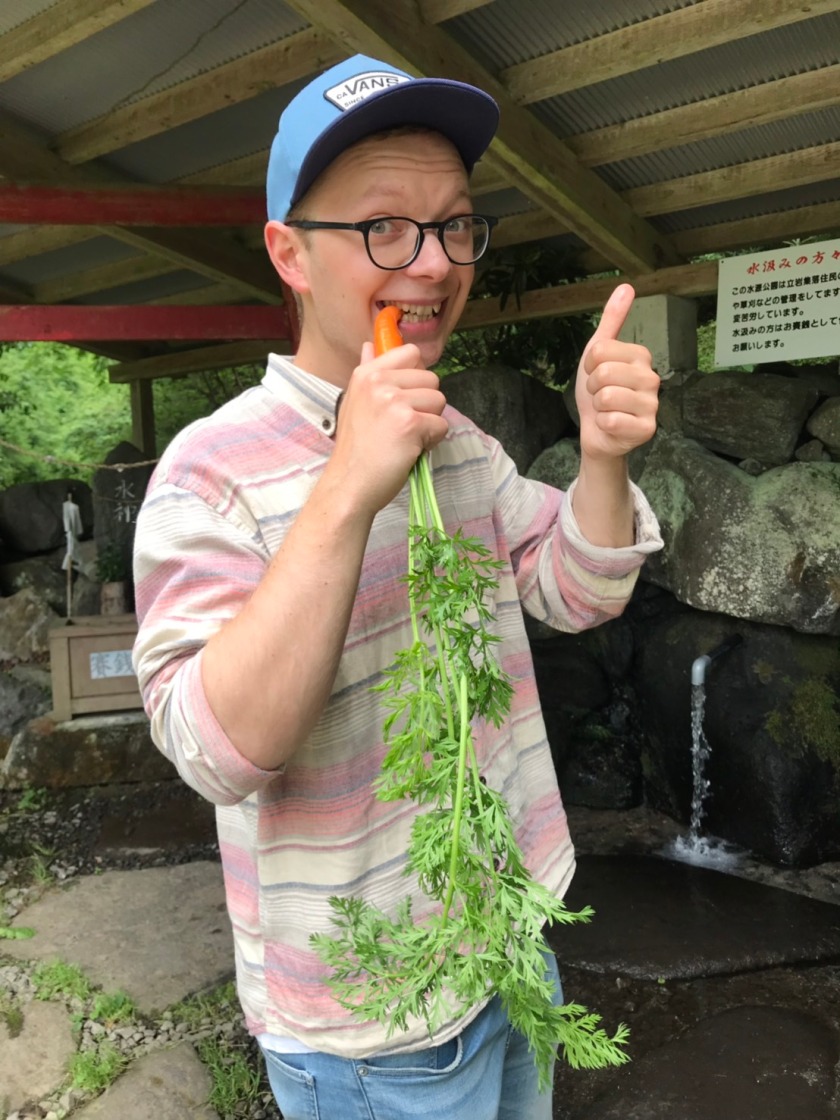 The post will end around here even though the day didn’t! After this point, I guess I got so swept up by the moment that I forgot to take pictures (You will have to settle for me eating a carrot!). I could write an essay about it but I wouldn’t want to bore anyone. In short, Akiyo-san had to leave for home, Magne and I took the car to the house of a lovely lady called Sumako-san where we enjoyed a fabulous dinner and some after-dark firefly sightseeing. Then, as you always do, we rounded off the day with a beer at Piero where Magne got swarmed by curious and fairly drunk elderly Japanese men before I managed to evacuate him safely and reunite him with Etsuko-san.

It was great to meet Magne who is such a fascinating person. He has lived a life of traveling and lived in more countries than I can probably even mention. His kind and gentle approach, which I believe is a result of having lived a life of interaction with many different people and cultures, was really inspiring to me. And come one, I can only wish to be in as good shape as Magne is when I’m 69. So happy to get to know a person with such a big heart and such a positive approach to life. Oh, and it was nice, and a bit weird, to be able to use Swedish for more than an hour or so on skype for the first time in over 6 months!

Since Magne is the visitor from abroad, most of the focus of this post has been on him but if it wasn’t for Akiyo-san the day wouldn’t have been as great as it ended up being! It is amazing that the three of us met for the first time, spent an entire day together and it felt like hanging out with old friends! Since Akiyo-san is from and lives here in Minamioguni I look forward to seeing her again soon! And thank you Akiyo-san for sharing some of the great pictures you took!

Wow, this is getting long…

2 thoughts on “Captain of the sea, Magne in Minamioguni!”